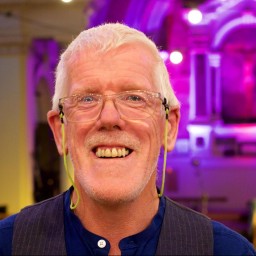 Figures danced around; beautiful but at the same time intimidating. Shapes and illusions trying to describe something that didn't really exist, or did it. Persistent drumming beats took away the mystery, as rain spattered against the window. The rattle became a roar as the droplets became balls of ice.

Jess started as a flash and clap rattled his chest bone. Not usually afraid, he was shaken at the speed with which the thunder followed the flash. Almost immediately a flash was followed by a deep rumble breaking into a strong vibrating crescendo.

He got up still not sure if he was awake or asleep and took slow steps across the untidy bedroom floor. The flashes illuminated his dingy flat and reminded him of being at the first night of a hit movie. Cameras flashing as he majestically hovered down the runway of fame.

The thought process alleviated a growing dread that he felt inside. He stepped up to his window, peered through the curtain and could see people sheltering in the bridge opposite his window.

Part of the London Underground, it was black with soot; a build-up of dirty black residue, from the bustling, city conurbation. He had a strange affection for its gloomy atmosphere, it reminded him of romantic depression. He noticed in the corner of his eye someone looking up to his window.

For a moment time froze and Jess felt connected through eternity to this voyeur, but instead of following up this strange sensation he nervously and gently stepped towards his safety zone: an armchair, it had a kind of conclusive feel about it, a history of old men drinking beer and smoking cigarettes. There was a yellow nicotine stain on the ceiling above it, that lit up with a flash as he was thinking about it.

It was true he was often distracted by his own thoughts. Not really present; was a description his parents used. He felt that he was not in the right place or even the right time quite often.

He booked the train a month earlier, it cost less that way, reserved at a certain time. He had felt pleased with himself at finally getting organised enough not to be hammered with a massive credit card bill that went on forever. Think ahead, failing to plan is planning to fail.

Now what would happen, the storm was really heavy, the train might never even go. Check the phone another nerve-calming operation, connect with the world outside. Have a look in the local paper and see what the weather is doing; check the trains.

He sunk into his favourite chair in an anxious state thinking about not catching the train. The idea went round in his mind time and again like a hamster in a wheel; scampering busily, getting nowhere but still going........

TRING TRING TRING TRING Jess started, the alarm clock was going full blast. He climbed out of the chair and staggered towards it. He had strategically placed the retro clock on the far side of the flock wallpapered dingy den, to get him out of bed.

Some days he had spent all day in bed not wanting to face anything. The whole situation had just got out of control, that was why he was leaving. His sister Gabby had suggested it to him.

She still cared about him for some reason; he thought everyone else had probably given up on him. The truth was no one really understood him; well that was almost the case. Every now and then Jess had spent time with people who got where he was coming from.

That company, however, was always cut short. He could enjoy his own company; it was fitting into the world of work and survival that upset him. That's why he was so concerned about getting out of this flat; getting up in the morning and on that train.

Jess gradually made his way to the bathroom. He hadn't looked at the time on the clock but was aware that it was really windy. His front door was rattling, which meant that the wind was gusting through the badly repaired window frame down the hallway.

Something was strange when he entered his poky little bathroom. There were an atmosphere and feeling and the storm was no longer at the front of Jess's mind. His shaving mirror looked like a window and he couldn't take his eyes off of it even if he had wanted to. He stepped close to his grubby little hand basin to get a closer look.

Suddenly his head lost all sense of itself. Then he felt a sucking drawing like he was travelling through a straw, a funnel a narrowing. He was without form but had a sense of himself. He didn't feel fear, he somehow knew this feeling; then splat. It was like a big paintbrush had scooped him up and flung him down onto a bed that wasn't his.

Creative Life – There is a time for Everything

Creativity and Wellness – Our environment – Ourselves

Subscribe to our newsletter to keep up with the latest trends!

Please log in again. The login page will open in a new tab. After logging in you can close it and return to this page.

​Want a painting. Let me send you options